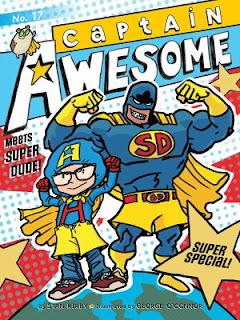 Captain Awesome Meets Super Dude!
(Captain Awesome #17)
By Stan Kirby
Illustrated by George O'Connor
Little Simon, 2016. Intermediate. 150 p.
Eugene (aka, Captain Awesome) is super excited to learn that his idol, Super Dude, will be visiting the local comics shop.  As the big day draws near Eugene notices an increase of activity among the local super-villain population. Is it possible they are planning a group attack on Super Dude? Captain Awesome and the other members of the Sunnyview Superhero Squad are determined to warn Super Dude before it is too late.

This is the latest in a great tongue-in-cheek series about a kid with a really active pretend life. Young readers will enjoy being "in on the joke" as Captain Awesome foils the evil Mr. Drools (a slobbery over-affectionate dog), Queen Stinkypants, (Eugene's diaper wearing little sister) and other neighborhood "villains."  Even though the book has 150 pages, it is on a fairly low reading level, with large print and lots of fun black and white illustrations.  This is a great transition intermediate for the superhero loving crowd.

Access Provo City Library on the go with the BookMyne app! Search the catalog, renew items, place holds, and much, much more. BookMyne is a free app available from both the iTunes and Google Play app stores.